"Where Your Safety Is Our First Priority"

Click The Button Below To Book An Appointment Online

Book Online Now! *When booking online it is important to note that our office staff will reach out to you to finalize the booking process. At times your first selected date may not be available due to potential travel time from or to the appointment before or after yours. Office staff will make final booking arrangements.* Anything Chimney is a professional chimney sweep located in Manchester NH. Collectively, our chimney company is certified through four separate, nationally recognized certification organizations. These organizations include the C.S.I.A, (The Chimney Safety Institute of America) the C.C.P, (Certified Chimney Professionals) N.F.I, (National Fireplace Institue) and C.C.R. (Certified Chimney Reliners) Anything Chimney installs chimney caps and performs chimney related masonry repairs including chimney pointing and chimney rebuilding. Anything Chimney can also replace chimney flashing and chimney crowns. Anything Chimney also offers chimney brick waterproofing and chimney block waterproofing. Whatever your chimney maintenance or chimney repair needs might be, you can trust Anything Chimney to get the job done right! Anything Chimney is much more than a chimney cleaning company! Keep scrolling for a list of the chimney services that we provide! Buying a home? We provide pre sale real estate chimney Inspections as well! Know the condition of your chimney BEFORE you purchase a home! Anything Chimney provides first class chimney cleaning and chimney repair services in the following cities and towns: Salem NH Manchester NH Londonderry NH Derry NH Nashua NH Hudson NH Amherst NH Bedford NH Windham NH Concord NH Dover NH Portsmouth NH Bow NH Hollis NH If your city or town was not mentioned here please scroll below to see our detailed service map. Anything Chimney provides first class chimney services anywhere within an hour of Manchester NH.

What is a Level One Chimney Inspection?

Why Hire A Certified Chimney Sweep?

How Often Should I Sweep My Chimney?

How Often Should A Chimney Be Inspected?

The National Fire Protection Association recommends that all chimneys be inspected annually. Remember to only trust a certified chimney sweep when it comes to the inspection of your chimney system! Certifications in the chimney field that require extensive knowledge regarding chimney inspection are: C.S.I.A and C.C.P. Always ask your chimney professional what certifications they hold before hiring them. The lead chimney sweeps at Anything Chimney collectively hold both the C.C.P and the C.S.I.A Certifications.

What Is A Level Two Chimney Inspection?

How Do I Know If I Am Burning Seasoned Firewood?

A lot of our clients end up with increased creosote build up in their flue systems due to burning "green" firewood that they believe is "seasoned" firewood. Burning green firewood can put you at an increased risk of having a chimney fire. The way that you can tell if you are burning "green" firewood is by purchasing a MOISTURE METER from a local hardware store. Moisture meters have two prongs that penetrate the wood in question and give you an accurate mositure content. The moisture content of seasoned firewood is 15-20 percent. All cord wood that is burned in either a fireplace or woodstove should show about a 15-20 percent mositure content. If your firewood reads substantially higher than that, it should not be burned.

Does Anything Chimney Do Free Estimates?

The chimney service industry is unlike most service industrys because of the fact that most potential safety defects are hidden and take time to uncover. For example, a potential client may notice some loose bricks towards the top of their chimney and just want an estimate on fixing those bricks; the unfortunate thing is, those bricks got loose for a reason. It could be a problem with the chimney lining system, it could be due to the lack of a chimney cap, it could be a worn out chimney crown. Whatever the reason is, the underlying cause of those loose bricks will take time to uncover and is not always straight foward. Chimneys are complex systems that are affected differently depending on what kind of gasses and by-products are being vented through them. Finding out the root cause of the problem takes investigation. Otherwise, at best, we would just be putting a band aid on a larger problem.

What Are Good Burning Habits?

When burning a woodstove or fireplace, it is important to remember to burn the appliance hot and to not choke down the damper or air intake. Many people do choke down on these things in order to achieve what is known as a "slow burn." Using this slow burn method will lead to an increased creosote buildup and an increased risk of a chimney fire. We do not reccomend choking down the damper, or the air intake.

What Is An Insulated Liner?

What Are The Dangers Of Using A Compromised Oil Liner?

A lot of homeowners tend to not pay any mind to where their oil furnace or boiler vents. Many times it vents into the chimney. Oil burning appliances produce many nasty chemicals as by-products of burning oil. These products include carbon monoxide and sulfur. Sulfur is dangerous because when it mixes itself with the mositure in the air it develops into a sulfuric acid. This sulfuric acid is usually what causes oil furnace and boiler liners to become compromised. And once the liner is compromised, there is an increased risk of carbon monoxide finding it's way into the home. The replacement of oil furnace and boiler chimney liners is a very large part of our job.

What Is The Danger Of Using A Fireplace Or Woodstove With A Defective Chimney Liner?

The danger of using a fireplace or woodstove with a defective chimney liner is that in the event of a chimney fire, the fire is more likely to spread into a structure fire. The reason for that is because once the chimney liner has gaps, cracks, or holes flammable creosote is able to build up behind the lining system. When this creosote ignites during a chimney fire, the fire will then be outside of the lining system and closer to parts of the home that are combustible.

How Much Should I Expect To Pay For A Chimney Sweeping?

Our price for a chimney sweeping and full safety inspection is $199. By the end of the safety inspection we will give you our professional opinion on whether or not the fireplace or appliance is safe to use. We will also provide you with a quote for repairs in the event that they are needed. All of our inspections are performed by certified professionals.

How Much Should I Expect To Pay For A Chimney Inspection?

Why Is My Chimney Leaking?

There are many different problems that could cause a leaking chimney. Many people immediately assume that it's an issue with the flashing, but that is not always the case. Many times it can be a defective boiler liner, lack of a chimney cap, defective crown, or even a chimney that needs to be rebuilt. Having an inspection to determine the causes of your chimney leak is the place to start. Leaking chimneys can be a headache, but we can absolutely fix them!

Why Is Smoke Coming Out Of My Fireplace?

If smoke is coming out of your fireplace, your chimney is having a drafting issue. There are numerous reasons that a chimney might have a drafting issue. These reasons include, but are not limited to: an improperly sized flue, a chimney that does not meet code height requirements, a clogged flue or a pressure issue within the home. If you are having a chimney draft issue, please call or book an appointment online for a level one chimney inspection. Our certified chimney sweeps will get to the bottom of your chimney draft problem and recommend the proper repair.

Do You Install Chimney Caps?

Yes, we do install chimney caps! We install many different types of chimney caps. We prefer to install custom, full coverage chimney caps because they offer the best range of protection from animals, as well as the elements, but we do offer more basic chimney caps as well. To view our custom chimney cap selection, please visit www.chimneycaps.net The caps that will offer you the most protection are caps numbered 9-16.

Should I have My Chimney Inspected After I Buy A Home?

No! You should have your chimney inspected BEFORE you buy a home. The National Fire Protection Association recommends a level two chimney inspection prior to a home being bought or sold. The reason for that is to protect the person buying the home from a potentially unsafe chimney. The chimney should be inspected by a qualified, competent, certified chimney sweep prior to the home being bought or sold.

What is a Chimney Crown?

What is Chimney Flashing?

What Is Chimney Pointing?

Chimney pointing, repointing, or tuck pointing all refer to the same basic concept. This concept is grinding out the old deteriorated mortar joints in a chimney or other brick structure and replacing the deteriorated mortar with fresh mortar. When a chimney needs to be pointed, repointed, or tuck pointed it is because the current mortar joints are in bad condition and the structural stability of the chimney or brick structure could become compromised if the problem continues to get worse. Moisture is also an issue when it comes to a chimney or brick structure that requires pointing, repointing, or tuckpointing. Moisture can seep into into those deteriorated joints and get inside the brick structure. Excessive moisture is very bad for chimneys and brick structures. When is pointing a chimney a bad idea? Pointing a chimney is a bad idea when the structural integrity of the chimney has already been lost. When there are loose bricks, cracked bricks or spalling bricks, chimney pointing may not be the correct repair. Sometimes the entire chimney needs to come down to the roofline and be rebuilt with new bricks and new mortar. Always consult with a certified chimney sweep to determine whether or not a chimney structure should be pointed, repointed, tuckpointed, or fully rebuilt. Thanks for reading and we look foward to hearing from you. Anything Chimney

What Is A Chimney Liner Made Out Of?

How Far Will Anything Chimney Travel For A Chimney Sweep Or Chimney Inspection?

Does My Oil Furnace Vent Through My Chimney?

Usually an oil furnace or oil boiler does vent through the chimney. The chimney flue that the oil furnace or oil boiler vents through is also usually the most neglected because most people do not even realize that their furnace or boiler vents through the chimney. This is a problem for many reasons: The gasses produced by an oil furnace or boiler are actually extremely corrosive and can do severe damage to the chimney system and chimney structure from the inside out. Oil furnaces and oil boilers produce carbon monoxide, so it very important to make sure that those gasses are staying very contained. If you have not had your oil flue inspected recently, please give us a call. Oil burning appliances can do serious damage to chimneys and the problems that they cause will only get worse if not attended to. Defective chimney liners that are venting oil appliances can cause significant masonry repairs as well as damage to other lining systems depending on how the chimney was originally constructed. Oil furnaces and oil boilers certainly do vent into a chimney flue more often than not, and it is extremely important to know the condition of those flues. Thank you for reading and we look foward to hearing from you! Anything Chimney

How Do I Know If I've Had A Chimney Fire? 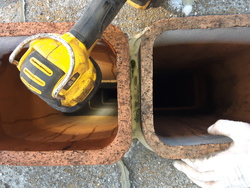 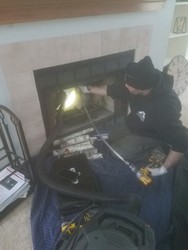 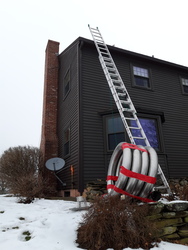 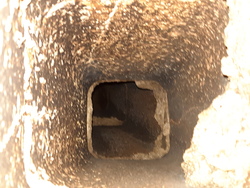 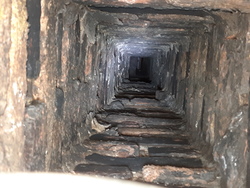 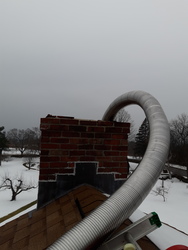 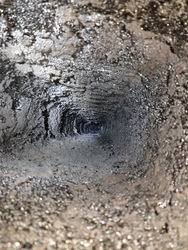 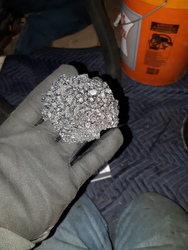 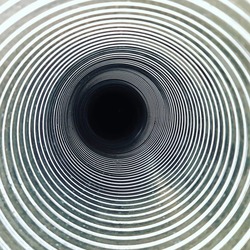 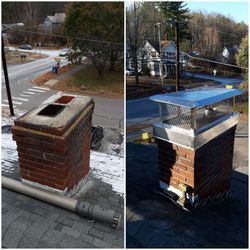 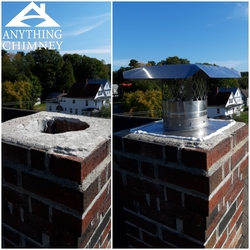 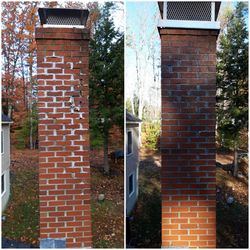 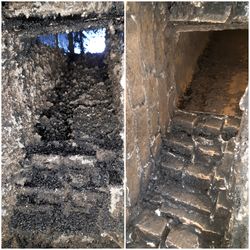 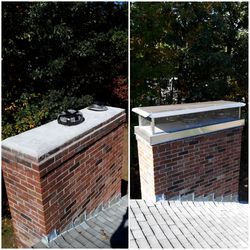 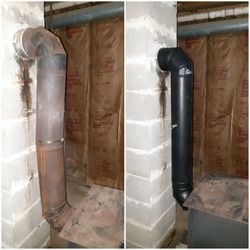 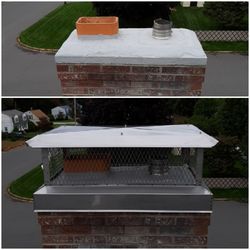 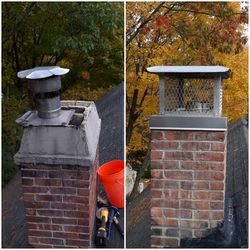 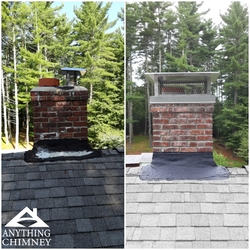 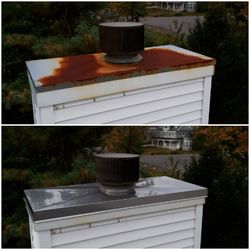 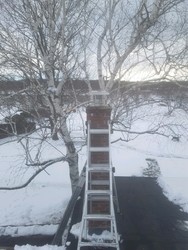 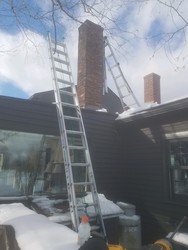 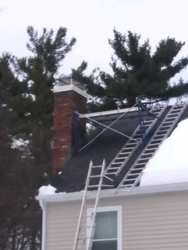 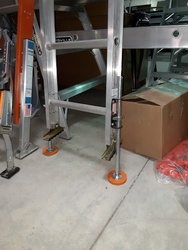